A Forgotten Irish Tale At The Whitaker

As Part of the Rossendale Art Trail weekend,  The Whitaker is launching ‘Ammemorium – A Forgotten Rebel’s Tale’, an Exhibition of new work by John Hyatt and Sam Windrow on Friday 30th September from 7.oopm.The event will include the launch of John and Bams new book. The exhibition will run until Sunday 27th November.

The work focusses on a secret mission that took place in 1916 in the South of Ireland, and involving John and Sam’s grandfather. John and Sam have researched the historical sources and pieced together the story. They have represented the true tale in oil paintings by John and poems by Sam.

The exhibition includes further works by John on an Irish theme where the darker days of a hundred years ago are contrasted with a colourful cornucopia of rebirth and optimism.

For further information on the Rossendale Art Trail, go to http://www.rossendalecan.wordpress.com

A Sensational 2016 Season On Offer From The Rossendale Players

The Rossendale Players have an excellent programme for their 2016/17 season. Here are details of what’s on offer:

We Are Three Sisters – 1st-8th October 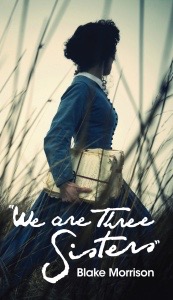 Against the backdrop of a dark, remote northern town, three remarkable young women live their lives brightly. Haworth 1840s, in a gloomy parsonage where there are neither curtains nor comforts, Charlotte, Anne and Emily Brontë light up their world with outspoken wit, aspirations, dreams and ideas. Anyone who has read a Brontë novel cannot fail to be stirred by their overwhelming humanity, charged emotion and brooding and prescient unease with the status quo. With exquisitely drawn characteristics, a nod to Chekhov and a touch of poetic license, this pearl of a play evokes with piercing clarity the life and distinct personalities of these three spirited individuals.

The play tells the story of a shy, reclusive girl nicknamed Little Voice and her larger than life out of control mother Mari. Desperately missing her dead father, Little Voice spends her time locked in her bedroom listening to his old record collection and perfecting astonishing impersonations of famous divas including Shirley Bassey, Marilyn Monroe, Judy Garland and Dusty Springfield. When Mari starts dating small-time club agent Ray Say, she thinks he’s her last chance for a better life. When Ray Say hears Little Voice sing, he thinks she’s his ticket to the big time. Little Voice just wants a normal life and to be loved. Not everyone is going to get what they want.

Is a celebration of love and life; it examines the nature of love, how it starts and then changes in the course of an enduring relationship. Chris Chibnall wrote the play when he was at the start of a relationship, hoping it would continue; two years later he was married to the girl who inspired the play. The title comes from song of the same name by The Magnetic Fields; Chris Chibnall is a great Northern Soul fan.

Is a 1976 play by Neil Simon, which is a comedy set in Suite 203-04 of The Beverly Hills Hotel. It’s a play divided into four parts: Visitor from New York, Visitor from Philadelphia, Visitors from London and Visitors from Chicago. In ‘Visitor from New York’, Hannah, a magazine writer is joined by her ex-husband, the question being with whom should their daughter spend the next six months? The banter flies fast and furious but Hannah’s well-wrought artifice crumbles as her fears take hold. The ‘Visitor from Philadelphia’ is a wife who arrives at the suite, catching her husband with a drunken prostitute. ‘Visitors from London’ brings a British Academy Award nominee returning from the ceremony empty-handed to husband Sidney whose homosexuality will be no comfort. The ‘Visitors from Chicago’ are two couples ending a disastrous vacation they should not have shared.

This drama by Norman Robbins sees Marion Bishop, an elderly writer who is dying.  Katherine Willis from the nearby village, looks after Marion while coping with her own mentally retarded brother of twenty.  When Katherine attends her cousin’s wedding in Scotland, experienced nurse Laura from London comes to take care of the failing writer, on the recommendation of the local doctor. A series of mysterious phone calls and the appearance of Marion’s nephew, sets off a nightmare situation, which becomes increasingly complicated when Katherine’s brother is found murdered in a ditch.  Deceit, suspicion, blackmail and incrimination are subtly woven into a web of crime, which is completed by a dramatic confrontation scene just before an ingenious twist brings a surprising end.

All tickets are £9, and for further information and tickets please ring 01706 228720. You can also get information from the web site at http://www.rossendaleplayers.org.uk 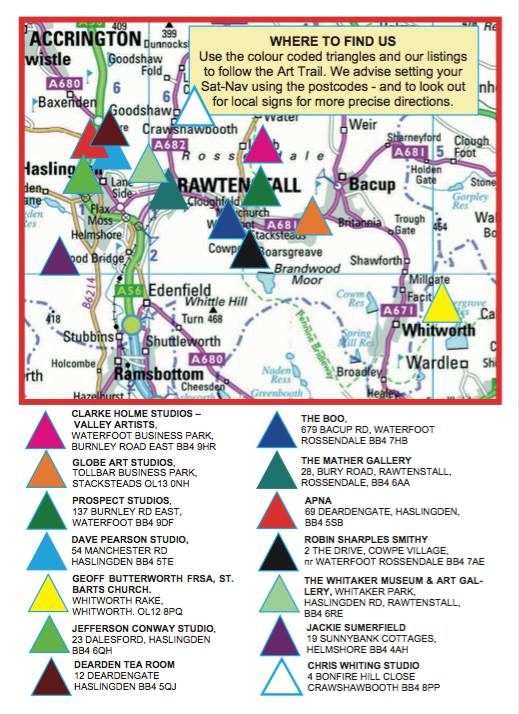 October brings back the successful Rossendale Art Trail, which this year will run over the weekend of 1st and 2nd October from 11.00am-5.00pm and entry is free.

Prospect Studios will also be raising money for Macmillan Cancer Trust over the weekend, with visitors given the chance to buy a slice of cake and coffee to raise money. 5 boxes of prints with work from Liam, Alan and Jill will be raffled to add to MacMillan’s coffers. A selection of 20 prints from various studios will be for sale at £10. Prospect Studio will be open in the evening  from 5-7pm for friends and artist to chat, view work and eat cake, before heading to the Boo to be entertained. The Boo will be open on the Saturday night from 7pm with free music and bar.Music will be provided by various artists including Liam Spencer, Sarah Grundy and others.

For further information, you can pick up a programme from any of the venues or check out the Rossendale Art Trail Facebook page.