Rossendale Arts Groups Are The Star-Makers Of The Future

It is widely acknowledged that the vast majority of children and young adults have untapped talent within them. It could be in Dance, Music, Singing, Acting or a combination. It just needs to be recognised and nurtured. The Rossendale Valley has within it a number of very strong amateur and commercial Performing arts groups who have as their main objective a desire to identify and develop the potential in everyone through diverse, professional and dedicated teaching staff with years of experience in their specific area of expertise. They are always looking for young talent to help develop their potential. So if you have raw talent for singing, dancing, acting or would simply like to have a go, any of the groups would be pleased to help. Many of these groups have already proven their abilities and have been an important contributor to the development of a number of successful performers.

Henry Farmer, a local Haslingden lad,  has realised his dream by playing the lead character of ‘Michael’ in the sellout musical ‘Billy Elliot’ currently running at Manchester’s Palace Theatre. 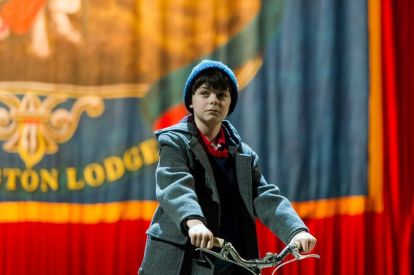 Henry joined the Rossendale Dance and Drama Centre in Waterfoot while at Haslingden Primary School and trained in both dance and drama. At his audition, the production casting director  advised Henry to work on his dancing and acting, he enrolled for lessons with teachers from RDDC and as a result, he got the part and hasn’t looked back. For further information, please check out their website at http://www.rddc.co.uk

Six of the 59 dancers who were on stage in Les Sylphides and a medley of different ballets at the Northern Ballet in Leeds are students at Dansworks Dance Academy based at Pioneer Buildings in Bacup.

Olivia Young is one of the youngest to win a place and also secured the only junior scholarship from the company. Olivia, from Bacup, has been dancing since she was just a year old when she started in the DansTots class. Her mum Jenny said: “This was her first audition and she was successful; she is going to go far.”

Olivia’s older sister Lexi Young was also picked for a part in The Rendezvous and The Reedpipes. She said: “I have been dancing since I was three and I do tap, ballet, musical theatre and jazz.”

Of the hundreds of young dancers who auditioned, just 55 girls were successful and two boys from Dansworks Sam Hughes, from Whitewell Bottom, and Jaydan Hanson-Beech from Bacup, were among the four who were picked for places. Jaydan said: “I have been dancing since I was about four years old; always at Dansworks. I started ballet in September 2014 and got a place in Polka Boys and Hornpipe. Ballet is really good fun and it lets me express my feelings. I met a lot of nice people in Leeds at the rehearsals.” 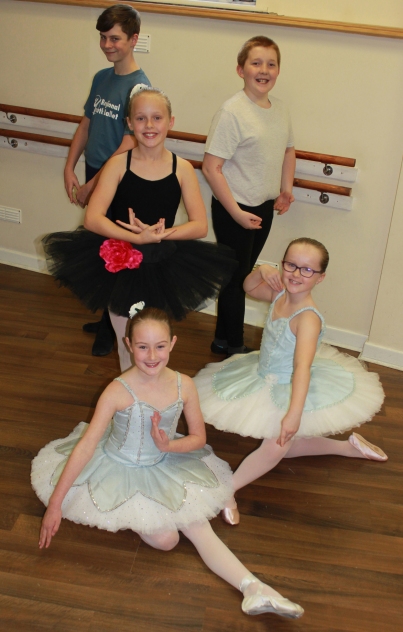 Front Lexi Young, then from left Rhianna Edwards and Olivia Young and from back left Jaydan Hanson-Beech and Sam Hughes.

Sam, who has danced since he was two-and-a-half-years-old will be taking on the role of Billy Elliot in the Swan Lake scenes and also dancing in Polka Boys. Also in the production from Dansworks were Grace Bentley, from Bacup, and Rhianna Edwards, of Waterfoot, who both also secured a place last year in the English Youth Ballet’s production of Giselle.

The dancers join an ever-increasing list of performers from Dansworks who have landed roles in major productions. Principal Karen Roe said: “I am delighted that so many of our young dancers do so well. It is an incredible opportunity for them at such a young age. It encourages them to keep on practising and may help them to consider dancing as a future career.”

For more information about Dansworks classes contact 07843 263714 or visit www.dansworks.co.uk

The Bacup Royal Court Theatre, through its Amateur Operatic and Dramatics Society (BAODS), was the first taste of performing arts for International Opera Star Seán Ruane started his journey into opera with the Rossendale’s St Mary’s Players, where he experienced both acting and singing, and identified his true love of singing through his time with BAODS. Pre the Internet, Sean recognised the importance of Bacup library as a source of information for music. Seán completed his undergraduate and postgraduate studies at the Royal Northern College of Music, and is one of the rising stars of the opera world, whose breathtaking vocal artistry comes with an endearing, easygoing style that has allowed him to grace grand opera, TV and sporting arenas with ease. Equally at home performing in front of the cognoscenti of Covent Garden or fervent football fans at Wembley.

Working with schools from the Blackpool, Blackburn and Bury areas, CHANT  produced a choir of children over 240 strong to perform at last years Children in Need. Singing ‘I’ll Stand by You’ the children performed live at Blackpool Tower Circus infront of a live audience of fundraisers and  millions of viewers at home.

The children were both entertained by the circus acts and did some entertaining themselves as they warmed up for their big performance. Encouraging audience participation they sang Rather Be and Sing along with ‘I Like The Flowers’ lead by the Choir Master Dan McDwyer and our Creative Director Sean Ruane.

For further information on the work of CHANT Productions, check out their web site at http://www.chantproductions.co.uk

There are opportunities for you to realise your potential. For further information on BAOBS and Bacup Royal Court Theatre, why not check out their web site at http://www.bacuproyalcourttheatre.com 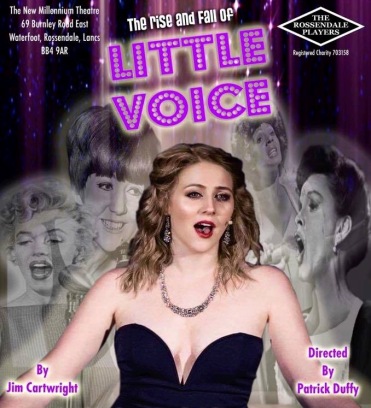 At the age of 10 Sophie Lord watched a production of “Oliver!” at Bacup Royal Court Theatre (BRCT), and from the moment the curtain went up she told my nana ‘this is what I want to do when I grow up”, and she has never looked back.

Soon after watching this production, she enrolled with BRCTs youth section “BYTES” ,and appeared in the chorus of their production of ‘Joseph!’. Every Saturday morning Sophie’s parents would drop her off at the theatre, where she learned the skills that she would need to make it in ‘show business’. Sophie admits that she didn’t know just what an impact Director Regina Arkwright and her team would have on her life.

Having been involved with the BYTES for a couple of years, Sophie auditioned for the role of ‘Ratty’ in the production of ‘Wind in the Willows’ and was lucky enough to be offered the role. This was the first of many roles within the youth section, including ‘Anna Leonowens’ in ‘The King & I’ , ‘Eliza Doolittle’ in ‘My fair Lady ‘and ‘Cosette’ in the National Operatic and Dramatic Association award winning production of ‘Les miserables’.

Sophie has also been lucky enough to tread the boards at Bacup Royal Court Theatre in the Adult Society’s productions, undertaking roles in many Pantomimes, musicals and plays over the past 16 years and has also appeared in shows all around the North West. But the biggest opportunity she has had was working on an American cruise liner as a Production singer on the Carnival Valor. She says that “This was the most amazing experience I have ever had, and I truly believe without all the support of local groups and local people, I would never have got this opportunity to live my dream”.

Her most recent role was that of ‘Little Voice’ in an outstanding production from the Rossendale Players of ‘The Rise and Fall of Little Voice’ where the review from NorthWest End magazine said “Taking on the lead role of Little Voice was Sophie Lord, and what a superb job she did! Pitching the shyness and reclusiveness of the character to perfection it made the moment you hear her wonderful voice for the first time all the more special. Her impersonations were also accurate with her Dusty Springfield being the stand out moment”. Further information about The Rossendale Players can be found on their web site at www.rossendaleplayers.org.uk

Have you got a talent that you would like help in developing? What are you waiting for. Contact any of the many performing arts groups in the valley and they will be there to help and support you.

If your group has an example of success that could inspire the youth of Rossendale, please let us know.